London in Our Minds, in Our Hearts… 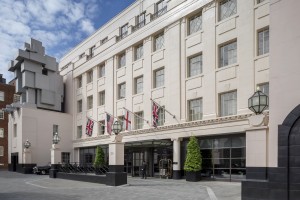 London was one of summer 2022’s top travel destinations, capturing 22 percent of European bookings by some measures. Now, the city is preparing for an action-packed fall. This October promises an impressive lineup of can’t-miss cultural and sporting events, giving travelers the perfect excuse to visit when the temperatures are crisp, the leaves are changing color, and the crowds have thinned out.

The expert concierge at The Beaumont, a landmark-listed boutique jewel overlooking the quiet Brown Hart Gardens in Mayfair, has helped narrow down their favorites of the season. And the recently-renovated property has also announced two new offers: a blind-folded wine tasting at The Colony Grill Room and a Spa Break package.

Start with Eureka Day, the European premiere of playwright Jonathan Spector’s 2018 drama starring Helen Hunt. The satirical play is about a mumps outbreak at a school in California, and the frenzy that ensues as parents squabble over mandatory vaccination. Timely, smart, and laugh-out-loud funny, it’s been described as “wince-inducing” satire that’s sure to get people talking. Runs at the Old Vic theater through October 31.

This fall, the first major British exhibition of the great American Realist painter Winslow Homer will be on view at the National Gallery. The “Force of Nature” exhibition will bring together more than 50 paintings, covering over 40 years of Homer’s career, spanning the American Civil War and the artist’s stints in France, England, the Bahamas, Cuba, and Bermuda. Visitors can expect sketches of battle and camp life, turbulent seascapes, and works that reflect Homer’s interest in the pressing issues of his time: conflict, race, and the relationship between humans and their environment. On view through January 8, 2023.

Finally, America’s National Football League is due to return to London this October, with three must-see games. On October 2, the Minnesota Vikings and the New Orleans Saints will open the series, followed by a game between the New York Giants and the Green Bay Packers (their first London appearance!) on October 9. Both games will take place at the Tottenham Hotspur Stadium. This year’s series will conclude at Wembley Stadium, with the Denver Broncos playing the Jacksonville Jaguars on October 30.

News from The Beaumont:

Be sure to check out the hotel’s newest services and amenities—including a blind-folded wine tasting at The Colony Grill Room. Sommeliers Giorgio Scavarelli and Antonio Verrando will take guests on a fun-filled exploratory wine journey, with the aim of introducing them to new and perhaps unfamiliar grape types and wine styles. For €50 per person, the sommeliers will pour four wines that will correspond to the selection of dishes ordered. Guess the wines served (name and vintage), the wine flight is free! Insider’s tip: Scavarelli is a native of Piedmont, so you might want to level up on your Nebbiolos and Barberas before the experience!

The Beaumont has also introduced a Spa Break package, which is available every day of the week, for one or two guests who are staying at the hotel for a single night. It includes a 90-minute spa treatment (choose from massages and facials), plus a glass of Gusbourne in the Gatsby’s Room, and the daily ‘Beaumont Baker’s Basket’ breakfast, among other inclusions. From €949 for a Classic Room.