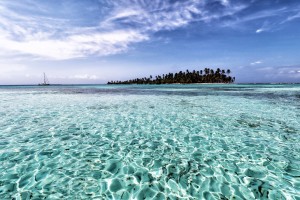 PONANT is collaborating with Smithsonian Journeys on a series of co-branded sailings for 2023. Each of the 21 itineraries will be led by two Smithsonian Journey Experts—whether an art historian, a solar astrophysicist, or an international relations expert—whose expertise and knowledge will shed new light on a destination and deepen travelers’ immersion in place.

Among the new sailings is an eight-day cruise aboard Le Bellot to Panama and Costa Rica. The immersive journey will combine a crossing of the Panama Canal, snorkeling and swimming on the beautiful Holandes Cayes, excursions in the Darién and Manuel Antonio National Parks, and encounters with local Indigenous communities—plus a specially arranged visit to the Punta Culebra Nature Center at the Smithsonian Tropical Research Institute (STRI), an open-air museum dedicated to tropical science and conservation. Back on the ship, expect inspiring talks and informative events led by two Smithsonian Journeys Experts, including climate leader Steve Paton, who has spent his career monitoring the climate and oceans of the tropics.

After setting off from Colón, Panama’s colorful port city, Le Bellot will journey to the San Blas archipelago, made up of more than 300 islands and home to approximately 40,000 members of the Kuna community, one of the most powerful Indigenous groups in the Western Hemisphere. From there, you’ll cross the Atlantic to the Pacific Ocean via the Panama Canal, the world’s most important waterway, before exploring the capital’s atmospheric Old Quarter, the Frank Gehry-designed Biomuseo, and the Punta Culebra Nature Center at the Smithsonian Tropical Research Institute (STRI). There, staff will share the latest research related to marine science and guests will observe rare species up close.

Next, you’ll sail to the Darién National Park, set in the wildest and most remote part of Panama. The UNESCO World Heritage site is a natural playground of sandy beaches, rocky coasts, mangroves, and tropical forests, as well as the home of the Emberá Amerindian community. Guests will visit their tropical village, admiring beautiful local crafts and enjoying traditional songs and dances.

The last stretch of the trip takes place in Costa Rica, starting in the spectacular Manuel Antonio National Park, a tropical reserve known for its variety of wildlife like sloths, howler monkeys, and toucans. Then Le Bellot will make her way to Puerto Caldera, the point of disembarkation, a gateway to the magnificent Arenal Volcano.

PONANT’s “Explore to Inspire” mission is centered around exploration to better understand, learn, share and protect. For more than 30 years, PONANT has been committed to more responsible tourism and voyages of exploration which have meaning. The French-flagged fleet comprises 13 small capacity ships equipped with state of the art environmentally friendly equipment. With PONANT, exploration is refined, authentic and a source of inspiration. The company sails to the Arctic and the Antarctic as well as in the Atlantic and North Europe, Mediterranean, Middle East, Red Sea and the Indian Ocean, Asia, Oceania and South Pacific, the Caribbean, North, Central and South America. For more information, visit  https://us.ponant.com or call 1-844-747-2873 or contact your travel advisor.

Since its founding in 1846, the Smithsonian Institution has been committed to inspiring generations through knowledge and discovery. It is the world’s largest museum, education and research complex, consisting of 21 museums, the National Zoological Park, education centers, research facilities, cultural centers, and libraries.  Two of the 21 museums – the National Museum of the American Latino and the Smithsonian American Women’s History Museum – are in the early planning stages. The total number of objects, works of art, and specimens at the Smithsonian is estimated at nearly 155 million, of which nearly 146 million are scientific specimens at the National Museum of Natural History. www.smithsonian.org

Smithsonian Journeys is part of Smithsonian Enterprises, a division of the Smithsonian which oversees the institution’s commercial activities, including the Smithsonian Channel, which is available in over 55 million households globally; the retail operation, which includes 35 museum and airport stores, food concessions; an E-commerce business, Smithsonianstore.com, and Smithsonian magazine, which reaches more than 8 million monthly readers, consumer and education licensing, and books. Smithsonian Journeys is a global leader in cultural travel for diverse audiences, offering unique, expert-led trips on all seven continents. In addition to ocean cruises with PONANT, Smithsonian Journeys offers small-group land journeys, river cruises, active journeys, cultural stays, private jet trips, tailor-made journeys for the independent traveler, and student travel programs. For more information visit www.SmithsonianJourneys.org or call 1-855-330-1542.

Beyond a Place of Worship: Three Extraordinary Hotel Chapels 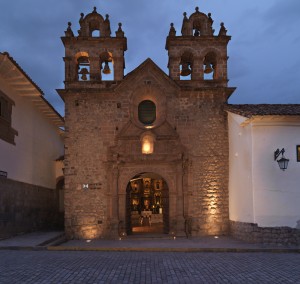 Beyond serving as places of worship or religious celebration, these extraordinary hotel chapels are portals into local customs and architectural and artistic traditions. Many have been painstakingly restored to their original splendor, offering visitors a chance to travel back in time—to the Italian Renaissance, the Andean Baroque movement in Peru, and the Byzantine period in Greece.

Located on the grounds of Kalesma Mykonos, the recently completed church of Agios Dimitrios is an exquisite ode to the island’s Byzantine past, brought to life by Greece’s top contemporary artists and design talents, including creative agency Saint of Athens. As many of the island’s aristocratic mansions contain worship areas with ornate religious imagery, the owners of Kalesma Mykonos wanted to pay tribute to this local tradition. Greek design firm K-Studio oversaw the church’s Cycladic architecture, while the interiors—a collaboration between Studio Bonarchi’s Vangelis Bonios and graphic designer/illustrator Gerasimos Chatzis—drew on a range of influences, including references to great Greek hagiographers, Hellenistic elements, and Byzantine heritage. A typeface was specifically created for the church’s interiors: a predominantly black Byzantine, tribal script with shining gold accents that depicts the Passions of Holy Week. An original soundtrack by musician Stefanos Giakoumakis borrows from the vibrations of the surroundings, fusing the sounds of water and air with choral and orchestral elements.

Walking inside the San Antonio Abad Chapel at Monasterio, a Belmond Hotel, you can’t help but feel the city’s Baroque history wash over you. Built on what was once the Palace of Inca Amaru Qhala, the church—constructed in the aftermath of the 1650 earthquake—features soaring ceilings with large-scale oil paintings in elaborate frames and a resplendent gold altar. It’s an astonishingly beautiful backdrop for weddings and other religious ceremonies. Guests can also exchange their vows within the cloistered walls of Monasterio’s main courtyard, amid grand stone arches, scented gardens, and a 300-year-old cedar tree. It’s no wonder the hotel has been recognized as a historical landmark by Peru’s National Institute of Culture.

Declared a National Monument in 1896, the Church of Villa San Michele all Doccia is a Renaissance-era masterpiece, complete with artworks that rival those at the country’s greatest cathedrals and galleries. Belmond faithfully restored the structure in 1988, washing the façade with distilled water and installing steel reinforcements to its weakest parts. The apse and the high altar are flanked with pietra serena columns, and there are four holy water stoups, two of which date to 1515, which is believed to be the year of the church’s original completion. Art aficionados can gaze up at Nicodemo Ferrucci’s Last Supper fresco, which has graced the walls since 1642 but was painstakingly restored in 1999, revealing details previously unseen, like the oil lamp above Christ’s halo. There is also a partially preserved 15ht-century fresco of the Ascension of Our Lord; a painting by Santi di Tito, who also completed works on the Vatican; and a stone coffin bearing the insignia of Pope Eugene IV. A colorful highlight is the 400-year-old wisteria, the only of its kind in Florence to bloom twice a year.

5 Favorite Indulgent Accommodations Around the Globe

A room with a view is always nice. But the world’s most indulgent accommodations go beyond sweeping vistas to offer sumptuous interiors, next-level service, and a dash of the unexpected—from a romantic open-air treehouse in Kruger National Park to a butler-serviced private riad in Marrakech complete with lavish rooftop terrace and home cinema. Take a peek inside: 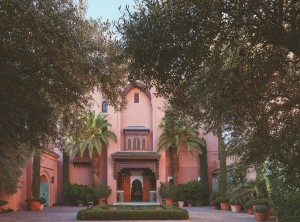 A four-bedroom oasis spread across three floors, this “medina within a medina” offers palatial-style design, private butler service, and a terracotta roof terrace inlaid with mosaics and offering sweeping views of the Atlas Mountain. Interiors are a vision of stucco lace, heavy drapery, Murano chandeliers, and a riotous mix of colorful wallpaper and precious stones. The ground floor opens onto a private garden with a retractable roof, while a cast iron elevator whisks you to the floors above, where each of the bedrooms has dressing rooms and private bathrooms. Other spaces include a dining room with billiards, a library for artful lounging, a neoclassical-style dining room, and the roof terrace with a plunge pool, Bedouin tent, and hammam. 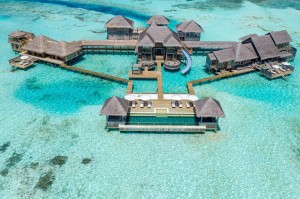 A Robinson Crusoe fantasy come to life, the Private Reserve at Gili Lankanfushi is the world’s largest overwater villa, stretching across the Indian Ocean in multi-level tiers. Guests spend their days lounging by the infinity-edge pool and in the overwater catamaran nets; working out in the air-conditioned gym; pampering themselves with treatments at the private couples’ spa (complete with a steam room and indoor/outdoor treatment rooms); and sliding down the top-deck waterslide into turquoise waters. By night, enjoy movie screenings at the private cinema, and retire in the guestrooms (of which there are two en suite master bedrooms and a guest suite), which have doors that open to the breathtaking scenery. Other perks of the Private Reserve include a fully-equipped kitchen and the option to curate your own wine selection from the 400-label cellar. 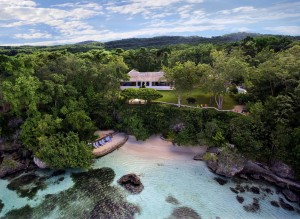 Situated within the GoldenEye resort, this villa is tucked away in a private garden, where it’s hidden by tall trees and tropical foliage. It’s here that acclaimed British novelist Ian Fleming wrote all 14 James Bond books, inspired by the lush scenery and the three-bedroom villa he designed to his own specifications. A dedicated butler is on hand to make your every wish a reality, while a chef can whip up Jamaican specialties and martinis (shaken, never stirred) to be enjoyed in outdoor settings like a sunken garden or on the private beach, where there’s a grill built into the side of a rocky cliff. Each of the villa’s three bedrooms has its own tropical garden area with a clawfoot tub and a garden shower, setting the scene for relaxation en plein air. There are also two private stand-alone one-bedroom cottages on site for larger groups or families. 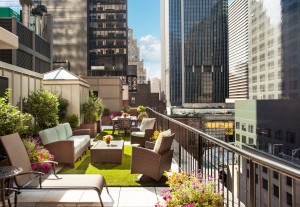 Guests of the Producer Suite will feel they’ve traveled back in time to New York’s heyday. Designed by French architect Thierry Despont, the expansive suite harks back to the city’s Art Deco past with its bold colors, geometric shapes, and a spiral staircase that spans two floors, leading to a panoramic roof terrace with views spanning over west 44th street and Manhattan’s skyline. Stretch out on a lounger enjoying the vistas of the city’s most iconic landmarks, and order room service for the ultimate New York power lunch. Butler services ensures you won’t have to lift a finger. 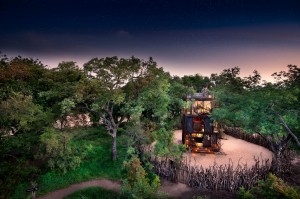 It’s impossible not to feel a sense of child-like wonder as you sleep under the stars at the Ngala Treehouse, surrounded by the wilds of Kruger National Park. The four-floor treehouse offers the ultimate thrill—of being one with nature—while drifting off to the sights and sounds of the forest, far from the distraction of civilization. Enjoy sundowner drinks and a starlit dinner picnic on the upper deck, then retire to the elevated sleep-out platform for sleeping outdoors under a retractable screen (there’s also a covered and weatherproof space should you want to move indoors). And just because you’re off the grid doesn’t mean you have to go without the conveniences of a hot shower or a flushing toilet. Talk about the best of both worlds!