Where to go now that the U.S. has lifted its Covid Testing Requirements

According to a recent poll by luxury travel agency network Virtuoso, 84% of consumer respondents are more likely to travel internationally now that the U.S.’s Covid-19 testing requirement has been lifted. (Let us know if you’d like more intel from Virtuoso!)  Here are some international travel ideas.

o   Fly to Shannon for a quick trip to Dromoland Castle for a weekend of golf, falconry, and even surfing (nearby Lahinch is known for luring surfers all summer) – golfers can play their 18-hole course before the ladies of the Women’s Irish Open in September.

o   Fly to Dublin for a weekend at The Westbury with visits to the Guinness store house, listening to music outside of a pub, and strolling through the Georgian neighborhoods.

o   The cobalt blue sky against the whites of Kalesma Mykonos are an Aegean summer personified. Faithful to its Greek roots and local traditions, the hotel has unveiled the artistic re-interpretation of the small church of Agios Dimitrios on property. Curated by graphic designer and illustrator Gerasimos Chatzis, the murals on the walls reference he friezes of ancient temples with their main body narrating the Passions of Holy Week. A bespoke soundtrack was also created mixing sounds of water and air with European orchestra instruments and voices of a choir.

o   With the new xenodocheio Milos in Athens, celebrated Greek chef Costas Spiliadis of the estiatorio Milos empire is returning to his roots – while marking a new chapter in the evolution of the Milos brand. Straddling the historic area of the Plaka and the trendy Kolonaki district puts it in prime location for exploring old and new.

o   Nestled within a Mediterranean jardin overlooking the Cote d’Azur is the cliffside retreat, La Réserve Ramatuelle opened for the season in May following last summer’s refurbishment courtesy of Jacques Garcia. This comes just in time for all business-class airline La Compagnie’s new seasonal route from Newark to Nice (which launched in May).

o   Belmond has partnered with internationally acclaimed art gallery Galleria Continua to host a series of large-scale artworks in its landmarked gardens across Italy. Indian artist Subodh Gupta kicked off the partnership with his large-scale “Cooking the World” installation in Cipriani’s Casanova gardens on April 23. In May, the final three major installations were revealed: Argentinian artist Leandro Erlich’s “Window & Ladder” at Florence’s Villa San Michele; Italian artist Michelangelo Pistoletto’s “Accarezzare Gli Alberi” (L’Etrusco) at Castello di Casole in Tuscany; and a garden installation by Cameroonian artist Pascal Marthine Tayou in Sicily’s Grand Hotel Timeo. The works will be on display until the properties’ seasonal closures in November.

o   The new Dior pop-up spa is available at Splendido, A Belmond Hotel, Portofino from June 1-September 30, 2022. The hotel’s serene gardens overlooking the Portofino Bay will be the setting for two Dior spa gazebos, offering the brand’s signature skincare treatments, including a new Dior Bronze Signature Massage, which focuses on boosting radiance and glow while also repairing the skin from the effects of the Italian sunshine.

Why? The Great British Pound is also at its lowest against the dollar since Covid began (currently at $1.22 to £1, compared to $1.41 to £1 last June) and JetBlue announced a July 19 launch of direct flights between Boston and London.

Why? Japan is just beginning to reopen for the first time since Covid began.

TRAVEL WITH THE ONLY PASSENGER SHIP SAILING TO THE NORTH POLE, PONANT’S LE COMMANDANT CHARCOT 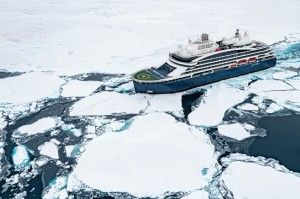 Le Commandant Charcot is the world’s only luxury icebreaker and the only passenger ship to take travelers to the Geographic North Pole, the most northern point of the Earth’s axis of rotation. With eight departures for the summer 2022 and 2023 Arctic season beginning at $35,960 per person, PONANT’s North Pole sailings will take tourists to the farthest corners of the region, where floating pack ice, polar bear sightings, naturalist-led excursions, and scientific collaboration are part of the itinerary.

The 16-day exploration begins in Longyearbyen, the capital of the Norwegian Svalbard archipelago, where winter temperatures drop below 40-degrees Fahrenheit and the glaciers and mountains stretch as far as the eye can see. From there, travelers will sail along the icy coast of Spitsbergen, the last stretch of land before the Arctic ice floe, characterized by rugged mountains and hollowed-out fjords. After four days of carving through the ice floe, where the landscapes are constantly changing, guests will arrive at the Geographic North Pole, a mythical site few people have ever reached.

Off-ship excursions range from outings in Zodiacs, kayaks, snowshoes, or by foot. There will also be opportunities to practice ice fishing and go ice floating. Guests will be outfitted with a special suit, designed to keep the body warm and clothes dry while buoyant on the fresh Arctic waters. Plus, chances to participate in citizen science experiments, like setting up a research station on an ice floe and deploying an Argos transmitter, a satellite-based system that collects and disseminates environmental data.

While the landscapes in the Geographic North Pole are frost-bitten and extreme, the accommodations aboard Le Commandant Charcot are inviting and luxurious. The ship is designed to feel more like a yacht versus a traditional cruise ship, with 123 staterooms and suites, chef-crafted meals designed by Alain Ducasse, a wellness area in partnership with Biologique Recherche, and extras like Veuve Clicquot Champagne, Kristal caviar, and Bordier butter.

But what sets the ship apart are her environmental credentials. PONANT has been a leader in responsible tourism for more than 30 years, and Le Commandant Charcot is among the most environmentally-friendly ships in the sea, powered exclusively by battery and LNG (liquified natural gas), which is the cleanest fuel on the market. When in battery mode, the ship can sail for up to eight hours at a time without producing any emissions and with very low noise levels, so as to not disrupt aquatic life.

PONANT’s “Explore to Inspire” mission is centered around exploration to better understand, learn, share and protect. For more than 30 years, PONANT has been committed to more responsible tourism and voyages of exploration which have meaning. The French-flagged fleet comprises 13 small capacity ships equipped with state of the art environmentally friendly equipment. With PONANT, exploration is refined, authentic and a source of inspiration. The ships explore the Arctic and the Antarctic as well as in the Atlantic and North Europe, Mediterranean, Middle East, Red Sea and the Indian Ocean, Asia, Oceania and South Pacific, the Caribbean, North, Central and South America. For more information, visit  https://us.ponant.com or call 1-844-747-2873 or contact your travel advisor.

The newest lodge from conservation-led travel company andBeyond is now open in a remote corner of the Serengeti known for Great Migration river crossings and very large local lion prides (consisting of between 20 and up to 60 lions).

Today, andBeyond  Grumeti Serengeti Tented Camp opens its doors to guests! With interior design by long-time andBeyond collaborator Fox Browne Creative and architectural design by Jack Alexander, the classical tented camp look is redefined in a form that will least impact the natural landscape. The contemporary and rustic spaces were made to bring guests closer to the surroundings, such as the nearby pool particularly popular with hippos, as well as the river drawing a constant flow of wildlife. Drawing inspiration from the natural setting, the main guest areas form a single sweeping arc following the contours of the river with a series of sitting and dining areas that flow naturally together. The large suites are made of canvas, banana fiber and hardwood cladding with deep baths and indoor showers, with outdoor decks and private plunge pools. All buildings were made with lightweight steel frames, canvas, and sustainably sourced local hardwood, allowing them to float over the landscape without the need for heavy concrete foundations and slabs.

As with all andBeyond projects, sustainability will be key in the rebuild and the new lodge will include a 130kWh solar system, which will allow it to run on 80% renewable energy. All hot water systems will also be replaced with brand new, energy efficient ones. Wastewater from the laundry will be recycled for other use and rainwater will be harvested for the swimming pools, while brand new technology will be installed to monitor underground water levels and ensure borehole capacity is not exceeded.

There are several new experiences including walking safaris and complimentary daily yoga classes.

andBeyond designs personalized high-end tours in 13 countries in Africa, five in Asia and four in South America, offering discerning travelers a rare and exclusive experience of the world as it should be. andBeyond owns and operates 29 extraordinary lodges and camps in iconic safari, scenic and island destinations in Africa and South America. This enables them to positively impact more than 9 million acres of wildlife land and over 1,800 miles of coastline. Established in 1991, andBeyond strives to leave our world a better place than we found it through their ethos of care of the land, wildlife and people, and the delivery of extraordinary guest experiences.