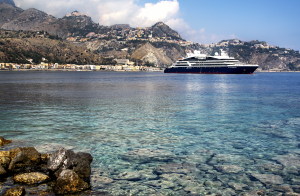 PONANT is collaborating with Smithsonian Journeys on a series of co-branded sailings for 2023 and 2024. Each of the itineraries will be led by two Smithsonian Journeys Experts—whether an art historian, a solar astrophysicist, or an international relations expert—whose expertise and knowledge will shed new light on a destination and deepen travelers’ immersion in place.

Among the new sailings is a nine-day circumnavigation of Sicily on Le Champlain, April 14-22, 2024.  Departing from Valletta, the capital of Malta, the itinerary includes visits to well-preserved Greek ruins, impressive Norman cathedrals, active volcanoes, and a handful of UNESCO World Heritage Sites, giving travelers a sense of these country’s ancient civilizations and cultural riches. On-board discussions by Smithsonian Journeys Experts will complement the excursions, adding important context and illuminating perspectives.

Like Sicily, Malta has also been ruled by various civilizations throughout history, making the destination a fascinating jumping-off point. From Valletta, Le Champlain will make its way to the smaller Maltese island of Gozo to see the megalithic temples of Ġgantija and an adjoining archaeological museum, plus red-sand beaches and a crystal-clear sea. Then it’s on to the southwestern coast of Sicily, home to the seaside commune of Porto Empedocle and the UNESCO-recognized Temple Valley, an archaeological site with temples dedicated to Zeus and other mythological gods. Rounding the western tip of the island, the ship will arrive in Trapani for an excursion into the countryside, the ancient Doric temple of Segesta, and the medieval hilltop commune of Erice. From there, it’s on to Palermo, the capital of Sicily, and one of Europe’s most vibrant and up-and-coming cities, where Byzantine mosaics and baroque churches exist alongside chic artisan studios and trendy restaurants. There, activities range from a tour of the Capella Palatina, a Byzantine-Arab-Norman structure with dazzling mosaics and magnificent inlaid marble floors and walls, or a drive to nearby Monreale to explore its famed Norman cathedral.

Just north of Sicily is Lipari, the largest of the Aeolian islands, characterized by lava stone quarries, a dramatic coastline, and a castle within a fortified citadel. After a visit here, travelers will sail north to Stromboli, taking in panoramic vistas of the active volcano, before crossing through the Strait of Messina to arrive at Taormina, the so-called St. Tropez of Sicily. There, visit a winery on the slopes of Mount Etna — the largest active volcano in Europe— or tour Taormina town with its historic Greek Theater which looks out to the dazzling coastline.

The final port of call is Syracuse, colonized by the Greeks in the 8th century B.C. and one of the most powerful cities of the ancient world, where guests will visit the Roman Amphitheater of Augustus and the 15,000-seat Greek theater.

PONANT’s “Explore to Inspire” mission is centered around exploration to better understand, learn, share and protect. For more than 30 years, PONANT has been committed to more responsible tourism and voyages of exploration which have meaning. The French-flagged fleet comprises 13 small capacity ships equipped with state of the art environmentally friendly equipment. With PONANT, exploration is refined, authentic and a source of inspiration. The company sails to the Arctic and the Antarctic as well as in the Atlantic and North Europe, Mediterranean, Middle East, Red Sea and the Indian Ocean, Asia, Oceania and South Pacific, the Caribbean, North, Central and South America. For more information, visit  https://us.ponant.com or call 1-844-747-2873 or contact your travel advisor.

Since its founding in 1846, the Smithsonian Institution has been committed to inspiring generations through knowledge and discovery. It is the world’s largest museum, education and research complex, consisting of 21 museums, the National Zoological Park, education centers, research facilities, cultural centers, and libraries.  Two of the 21 museums – the National Museum of the American Latino and the Smithsonian American Women’s History Museum – are in the early planning stages. The total number of objects, works of art, and specimens at the Smithsonian is estimated at nearly 155 million, of which nearly 146 million are scientific specimens at the National Museum of Natural History. www.smithsonian.org

Smithsonian Journeys is part of Smithsonian Enterprises, a division of the Smithsonian which oversees the institution’s commercial activities, including the Smithsonian Channel, which is available in over 55 million households globally; the retail operation, which includes 35 museum and airport stores, food concessions; an E-commerce business, Smithsonianstore.com, and Smithsonian magazine, which reaches more than 8 million monthly readers, consumer and education licensing, and books. Smithsonian Journeys is a global leader in cultural travel for diverse audiences, offering unique, expert-led trips on all seven continents. In addition to ocean cruises with PONANT, Smithsonian Journeys offers small-group land journeys, river cruises, active journeys, cultural stays, private jet trips, tailor-made journeys for the independent traveler, and student travel programs. For more information visit www.SmithsonianJourneys.org or call 1-855-330-1542.

« MAROMA, A BELMOND HOTEL, RIVIERA MAYA TO REOPEN IN MAY 2023 NEW SMITHSONIAN JOURNEYS AND PONANT EXPEDITION: A ‘SYMPHONY ON THE ST. LAWRENCE’ FROM QUEBEC TO THE CANADIAN MARITIMES, OCTOBER 16-30, 2023 Featuring Keith Lockhart, Conductor of the Boston Pops »